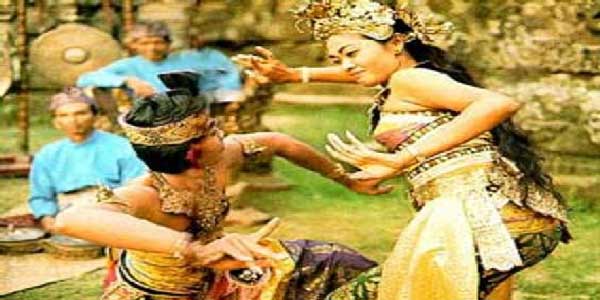 Bumblebee dance, more correctly, the Oleg Tambulilingan Created in 1952 by a famous male dancer Mario ( real name Ketut Marya) for a world fare, performed by the famous dance troupe from Peliatan, close to Ubud, in 1951. The Bumblebee Dance is a very sensual performance and mimics the mating dance of 2 bumblebees, the male obsessed with the female who elegantly and coyly keeps him away. She eventually gives in at the finale. The female role is especially complicated and sometimes 2 girls play the roles. Balinese female dancers wear a tightly-bound sarong and dance by bending forward slightly, keeping their feet close together and bending their arms at right-angles.

The head and eye are worked so you get this very puppet-like movement which obviously takes a lot of practice. Male dancers use a wider stance and adopt a more aggressive style. The “male” character appears in the second section, and the two engage in a partly choreographed, partly improvised dance depicting their courtship. They are accompanied the gamelan kettle drum / xylophone orchestra.

In the case of the gamelan joged, by one or two bamboo marimbas (or metallophones) playing lively syncopated rhythms, a small gong-type instrument, and a conical two- sided ‘kendang‘ drum. The drummer’s role is especially important, as he responds to the dancer’s spontaneous movements with sudden accents, or changes in tempo or dynamics.

This dance is not performed too often but a tourist might get a chance to see it at a festival such as the Kuta Karnival. Another dance that is put on for crowds is the Joged Bumbung. This is also a mating ritual where a male dancer tries to entice the female with his dancing skill, the lucky male being allowed to enjoy a few seconds of hip-grinding to the excitement of the crowd. A Joged Bumbung is accompanied by gamelan joged (small ensemble of bamboo marimbas, drum and other percussion) which has been also used in instance to accompany the Oleg Tambulilingan. 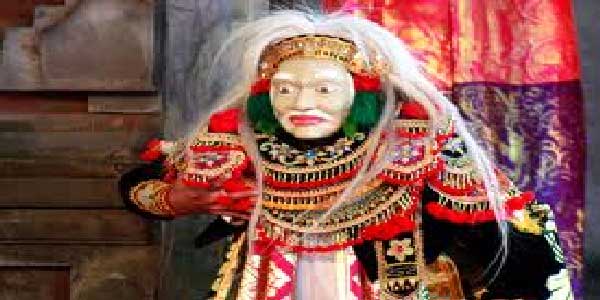 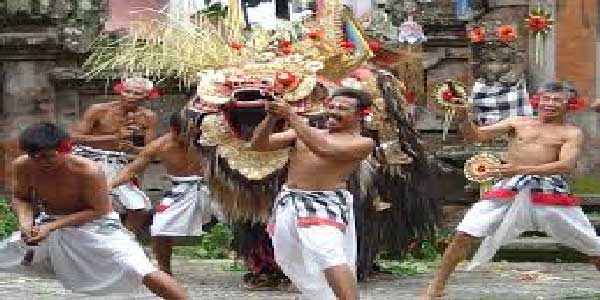