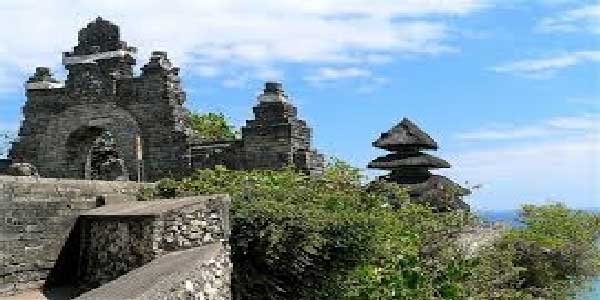 Pura Luhur Uluwatu is one of Bali's kayangan jagat (directional temples) and guards Bali from evil spirits from the SW, in which dwell major deities, in Uluwatu's case; Bhatara Rudra, God of the elements and of cosmic force majeures. Bali's most spectacular temples located high on a cliff top at the edge of a plateau 250 feet above the waves of the Indian Ocean. Uluwatu lies at the southern tip of Bali in Badung Regency. Dedicated to the spirits of the sea, the famous Pura Luhur Uluwatu temple is an architectural wonder in black coral rock, beautifully designed with spectacular views. This is a popular place to enjoy the sunset. Famous not only for its unique position, Uluwatu also boasts one of the oldest temples in Bali, Pura Uluwatu. Most of Bali's regencies have Pura Luhur (literally high temples or ascension temples) which become the focus for massive pilgrimages during three or five day odalan anniversaries. The photogenic Tanah Lot and the Bat Cave temple, Goa Lawah, is also Pura Luhur. Not all Pura Luhur are on the coast, however but all have inspiring locations, overlooking large bodies of water.

Pura Uluwatu is located on the cliff top close to the famous surf break on the SW of the Bukit peninsula. Empu Kuturan, a Javanese Hindu priest who built the tiered meru, founded the temple in the 10th century and a shrine here as well as at other key locations longs the Balinese coast. In the 15th Century the great pilgrim priest Dhang Hyang Dwijendra, who established the present form of Hindu-Dharma religion, chose Pura Uluwatu as his last earthly abode: history records that Dwijendra achieved moksa (oneness with the godhead, in a flash of blazing light) while meditating at Uluwatu. The temple is regarded, by Brahman's island wide, as his holy 'tomb'. Legend also tells us that Dwijendra was the architect of the beautiful temple, as well as many other major temples on Bali, Lombok and Sumbawa. In the 17th century Niratha also from Java came to Bali and built temples, adding to Uluwatu.

Behind the main pagoda of Pura Uluwatu's small inner sanctum, a limestone statue of a Brahman priest surveys the Indian Ocean-it is said the statue represents the founding priest Dwijendra. Another shrine within the complex represents the boat on which Dwijendra traveled from, then, Hindu Java. According to legend he arrived at Pura Peti Tenget, north of Kuta.

Uluwatu Beach is known for its surf and, in nearby hostelries, its full moon rage parties. It rages at the temple too but in an orderly way, thanks to the royal house of Puri Agung Jero Kuta, Denpasar, who are the temple's hereditary pangemong (custodians). Hundreds of nobles from this family, and many 'devotees' (pengayah) and village pemangku priests from nearby hamlets, ensure that every seven months (on Anggar Kasih Medangsya by the Wuku Calendar, to be exact) the festival is run efficiently, and most elegantly. The palace is proud of its ancestral role: it manages the awesome logistics with fitting dignity.

Being a popular surfing spot for the very experienced, Uluwatu offers a wonderful vantage point to view a spectacular sunset. Warungs or small restaurants perched on the cliff offer a comfortable spot to survey the vast Indian Ocean beyond and below the 100-meter-high cliffs with panorama on three sides. Monkeys inhabit the temple and cliff face hoping for a banana or some peanuts from the visitors. 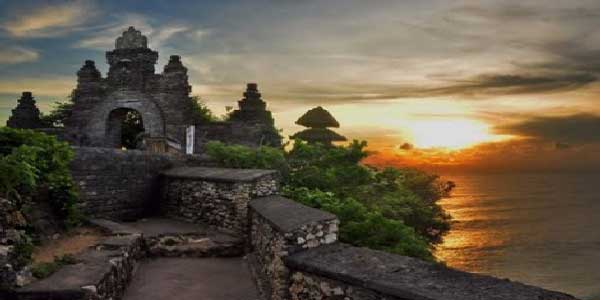 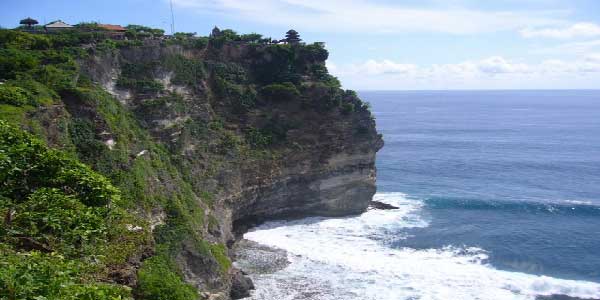 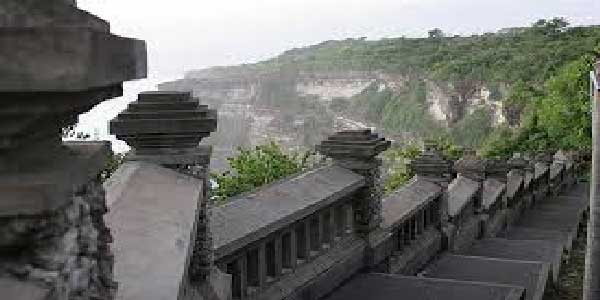 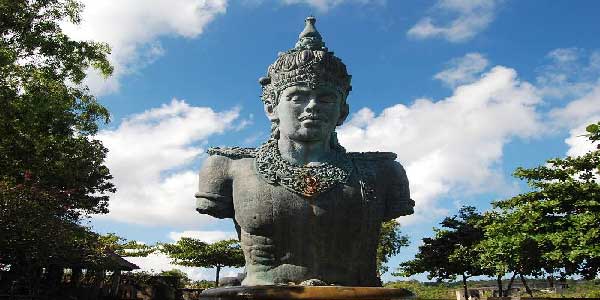 Garuda Wisnu Kencana is a tourist park in the southern part of the island of Bali. 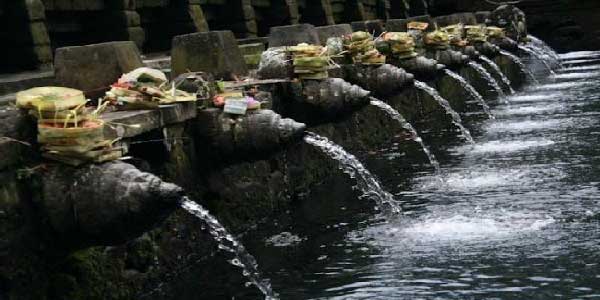 Tirta Empul Temple is the temple of Tampaksiring, built around a sacred spring. Tampaksiring is an inscription dates the spring all the way back to 926AD, and there are fine carvings and Garudas on the courtyard buildings. 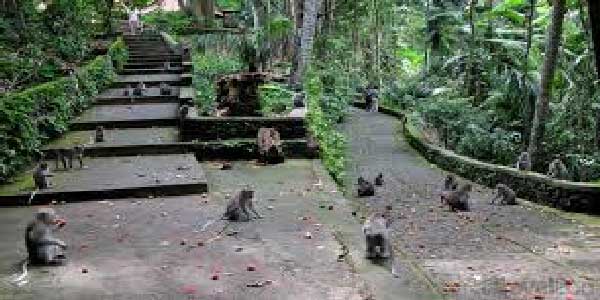 Monkey Forest is the name of a village of which its nothern pan is overgrown with nutmegs to the eitent of M hectare, and which is occupied by hundreds of monkeys. 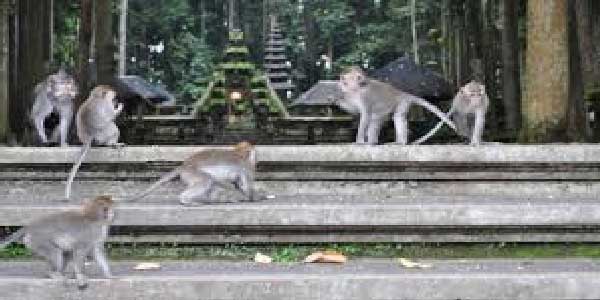 Alas Kedaton is one of the famous tourist destinations in Tabanan Regency located in Kedaton countryside north part of Tabanan town. 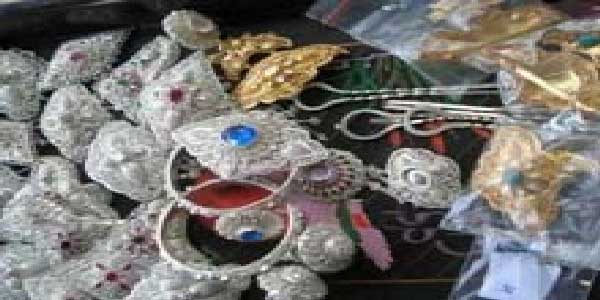 Celuk Village is the famous village in Bali as a tourist destination cause of the local residents is very proactive and full of innovation to the gold and silver crafting. 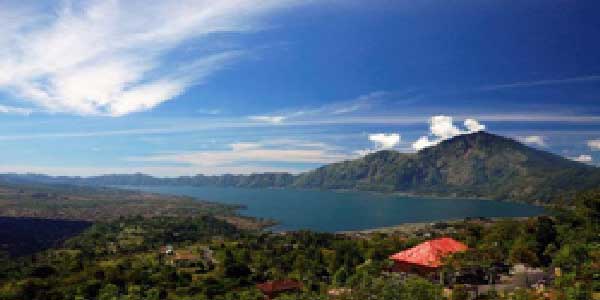 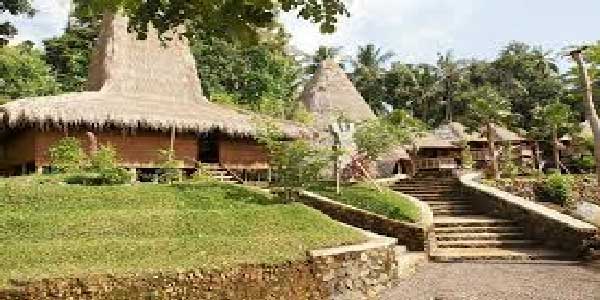 Taman Nusa is a culture park that aims to offer a comprehensive information on the cultures of Indonesia. 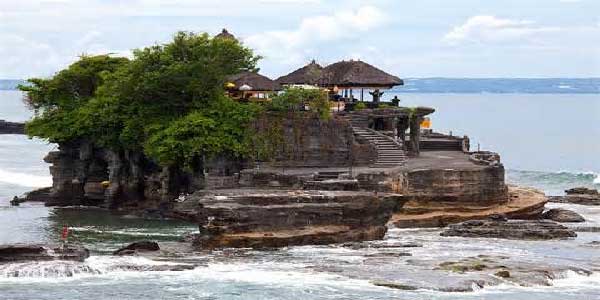 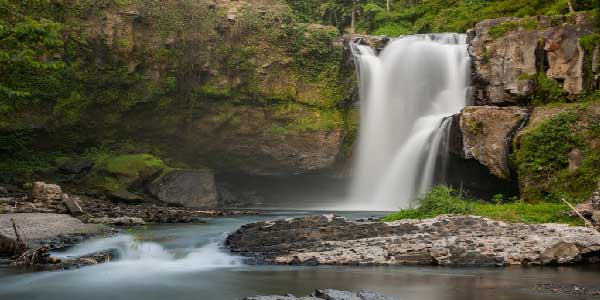 Water fall with clean and fresh water to play around or bath in Tegenungan Kemenuh Village, District Sukawati, Gianyar.